“With the instant electric torque, for example, I can just punch it. With no gearing, the motors just go straight up to their top speed. It has actually really opened up the possibilities of what we can do making these Gymkhana films in ways we didn’t necessarily expect.” 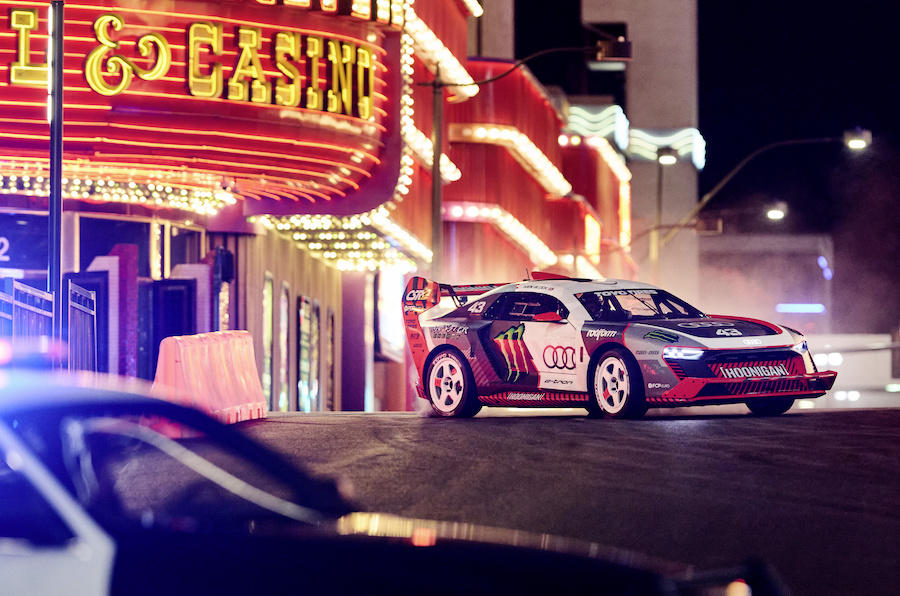 Finally, Electrikhana is unleashed, and there couldn’t be a more thrilling backdrop for the Audi S1 Hoonitron than the neon lights of Las Vegas – with a route around the city’s iconic Strip that takes in many of its famous landmarks.

Celebrating Audi’s electrifying motorsport heritage, the video also features a few of the classic Audi race cars that have inspired Ken Block on his road to Electrikhana – including the 1988 Trans Am title-winning Audi 200, the 1989 IMSA title-winning Audi 90 GTO, and the Audi Sport quattro S1 that Walter Rohrl drove to the 4301m summit of the famed Pikes Peak hillclimb in 1987 in a record-breaking 10m48s.

Look carefully and (alongside a brief cameo from Elvis himself) you’ll also see nine-times Le Mans 24 Hours winner Tom Kristensen, and two of the cars – the Audi R8 LMP, and the Audi R18 e-tron quattro – that he drove to victory.

“With the Audi S1 Hoonitron, we’ve broken entirely new ground at Audi,” said Oliver Hoffmann, Audi Board Member for Technical Development. “Developing a fully electric prototype for the Ken Block was an exciting challenge, to which the whole team rose with flying colours. It’s great to see how ‘Vorsprung Durch Technik’ is presented in an all-new environment.”