Two Asian-Amercian customers at an In-N-Out Burger in San Ramon, California, were filming a TikTok video when a man verbally abused them with homophobic and racist language. The video, posted on Christmas, has since gone viral and led police to arrest suspect Jordan Douglas Krah on hate crime charges.

In the video, Arine Kim and Elliot Ha are seated inside an In-N-Out Burger, filming Ha’s reaction to Kim’s “light-well fries.” Off camera, a man approaches and asks them if they’re filming themselves eating, then he calls them “weird homosexuals.”

Kim and Ha are taken aback by the comment but continue their review when the man returns to ask about their ethnicity. When Ha tells him he’s Korean, the man says, “You’re Kim Jong Un’s boyfriend, huh?”

Not quite sure how to react, Ha plays along as the man’s questioning about his sexual orientation starts to become more aggressive. Kim notices that the situation is escalating and tells Ha to stop engaging and not react. The conversation’s tenor suddenly changes — Ha apologizes, and the man off-camera begins to threaten him.

“Normally, I could spit in your face,” he says. Then he makes a derogatory remark about Filipinos. 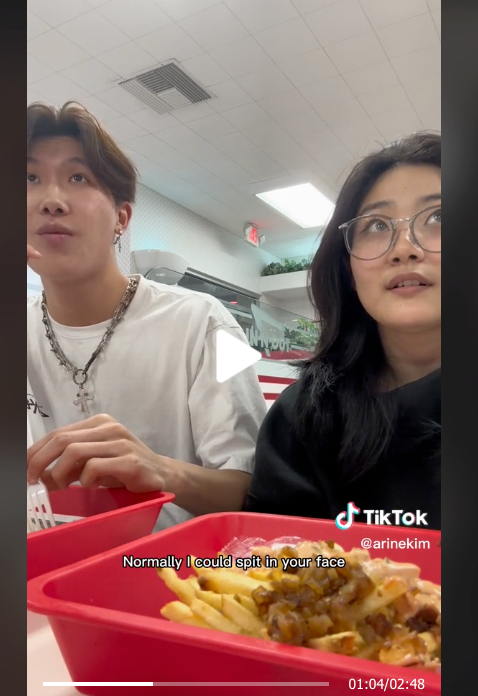 The man returns a few minutes later, harassing them with more homophobic comments before threatening to meet Ha outside. Kim asks nervously, “Do you think he’s going to pull a gun on us?” 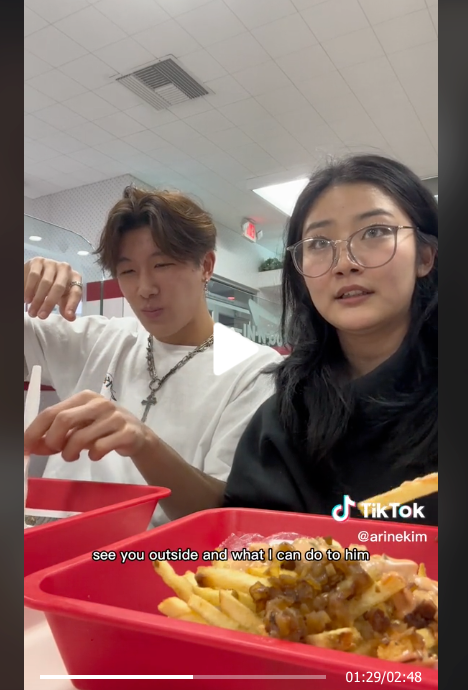 Kim posted the disturbing video on Christmas day and immediately received an outpouring of support from TikTok users shocked by the abhorrent hate language used. Some Venmoed money saying the next meal was on them.

Kim’s TikTok caught the attention of Chief Denton Carlson of the San Ramone police department, who contacted Kim via Twitter. The next day the police arrested a suspect identified as Jordan Douglas Krah of Denver, Colorado.

As a result of his actions that were captured on video Christmas Eve, @SanRamonPolice personnel have arrested Denver (CO) resident Jordan Douglas Krah (DOB – 5/17/82) for violating California’s Hate Crime Laws as described under Penal Code 422.6.

Krah was later released, but in an update video on TikTok, Kim says she has pressed hate crime charges.

The incident left many wondering what happened after Kim shut off the camera. So Kim made another video a few days later, explaining that Krah waited outside the restaurant for about 10 minutes, glaring at them through the window.

“We just stayed in our seats and didn’t move because we were scared if we did move, he would use that as an invitation to harass us more,” she said.

She also revealed that she’d been contacted via Instagram by a Filipino family, who claimed that Krah spit and hurled racist comments at them in nearby Danville.

Kim said she and Ha didn’t initially go to the police because Krah didn’t physically harm them. “I honestly thought our experiences were going to be dismissed,” she explained. “We didn’t think anyone would care.”

But the reaction on TikTok and from law enforcement has been overwhelmingly supportive. Kim said she was grateful to have the platform to shed light on hate crimes and “the atrocities that minorities have to go through on a daily basis.”

According to a report published by Stop AAPI Hate, the Asian American community reported more than 10,000 hate incidents in 2020 and 2021, nearly half occurred in public places.

“I hope my situation inspires others to talk about their own experiences,” Kim said.

10 Teas for Acne-Prone Skin (for internal and topical use)

Is Energy a Good Career Path Going Into 2023? 5 Body Language Signs of a Manipulator Your Employees Want This Perk, and Giving It To Them Can Improve Your Bottom Line The Sales Strategy That Britney Spears’ Perfume, Ghirardelli Chocolate and Toms Shoes Have in Common