Bored With Your Workout Regimen? Take a Playful ‘Silly Walk’

Every December, the British Medical Journal (BMJ) editors put together a light-hearted Chrismas issue that contains playful evidence-based scientific studies that are rigorously researched and peer-reviewed—but also meant to be fun.

The researchers found that just 11 minutes per day (77 mins/week) of silly walking—which involves randomly throwing one leg up in the air, followed by spontaneous deep knee bends or little bunny hops—fulfills the cardio portion of someone’s weekly exercise needs based on the most recent physical activity guidelines (Piercy et al., 2018).

Current physical activity guidelines recommend performing at least 75 minutes of vigorous-intensity aerobic exercise or 150 minutes of moderate-intensity cardio per week, plus lifting weights or doing other strength-building activities at least twice a week. 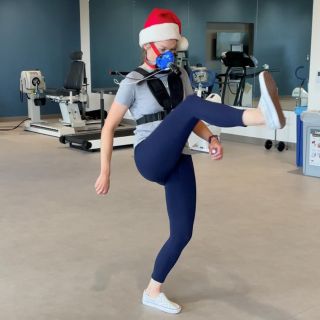 For this laboratory-based experimental study of silly walking, first author Glenn Gaesser of Arizona State University and colleagues at Kansas State University and the University of Virginia recruited over a dozen healthy adults without any gait issues. In the lab, Gaesser et al. measured participants’ energy expenditure using a mobile calorimetry device as each person did their best to mimic Mr. Teabag’s silly walking style.

“Our analysis of the energy consumed during different styles of walking seeks to empower people to move their bodies in more energetic—and hopefully joyful—ways,” the authors explain in a December 2022 news release.

This video shows study participants in the lab during the “silly walk” experiment wearing red and white Santa hats as a reminder of the BMJ Christmas issue’s commitment to playfulness.

Before exercise physiology testing began in the lab, participants watched a Monty Python video of John Cleese performing his absurdly inefficient Mr. Teabag walking style during a “Ministry of Silly Walks” comedy sketch. Then, each participant was instructed to mimic this silly walking style while the researchers scientifically measured calorie usage, oxygen uptake, and METs.

METs are “metabolic equivalent of task” units assigned to different levels of energy expenditure during various intensities of physical activity.

For example, the amount of energy used while sitting is typically about one MET, whereas walking at a moderate pace in an efficient style uses about four METs. During this silly walking experiment, the researchers found that walking in an inefficient “Teabag style” uses upwards of six METs per minute. Any physical activity that uses more than six METs is considered vigorous, high-intensity exercise.

The latest (2022) research shows that Monty Python-inspired “silly walking” is vigorous exercise that could be done independently or incorporated into a high-intensity interval training (HIIT) program to reach weekly fitness goals.

As the authors summed up,

Our study used indirect calorimetry to look at an important public health issue—how to remedy the high global prevalence of physical inactivity—to show that adults could achieve 75 minutes of vigorous-intensity physical activity per week by walking inefficiently for about 11 minutes per day.

In their paper’s conclusion, Gaesser et al. wrap things up with a touch of dry wit, fitting for the BMJ‘s Christmas issue: “Had an initiative to promote inefficient movement been adopted in the early 1970s, we might now be living among a healthier society. Efforts to boost cardiovascular fitness should embrace inclusivity and inefficiency for all.”

Why Do Some Relationships Strengthen, While Others Decline?

How Pet Owners Cross the Line Into Animal Hoarding Are There Ever Times When We Should Avoid Conflict?

Can One-Night Stands Last Longer Than One Night?