Edi Rama said the UK had been a beacon for the world in terms of integrating people arriving from abroad – but now claims it has a culture of ‘finding scapegoats’ during the migration crisis when ‘failed policies’ are to blame.

It came as migrants were pictured performing Albania’s controversial eagle gesture as they left the Manston arrival centre.

Mr Rama said he was ‘disgusted’ by the Home Secretary’s language in a combative Commons debate this week in which she claimed there is an ‘invasion’ of England by migrants crossing the Channel.

Edi Rama told Newsnight last night that these were ‘crazy words’ and said this sort of language fuels xenophobia and goes against ‘the great British tradition of integrating the minorities’. He has claimed that 70 per cent of the 140,000 Albanians in the UK were living in Italy and Greece and that Albanians in the UK ‘work hard and pay tax’.

He said: ‘I thought it came a point where it was impossible to not react because it was really an embarrassment for our civilisation to hear all kind of crazy words being thrown in the air like normality and “invasion” was the peak.

‘It’s about the climate that has been created, and it’s about finding scapegoats and blaming others.

Asked what the consequence of this language might be for Albanians settled in the UK, he said: ‘It doesn’t come for good. This kind of language is not a policy, is not a programme, is not a vision, is nothing but to fuelling xenophobia and targeting, singling out community and practically going totally against the great British tradition of integrating the minorities.

‘Britain was a role model in this and now is becoming like, I don’t know, like a madhouse’. 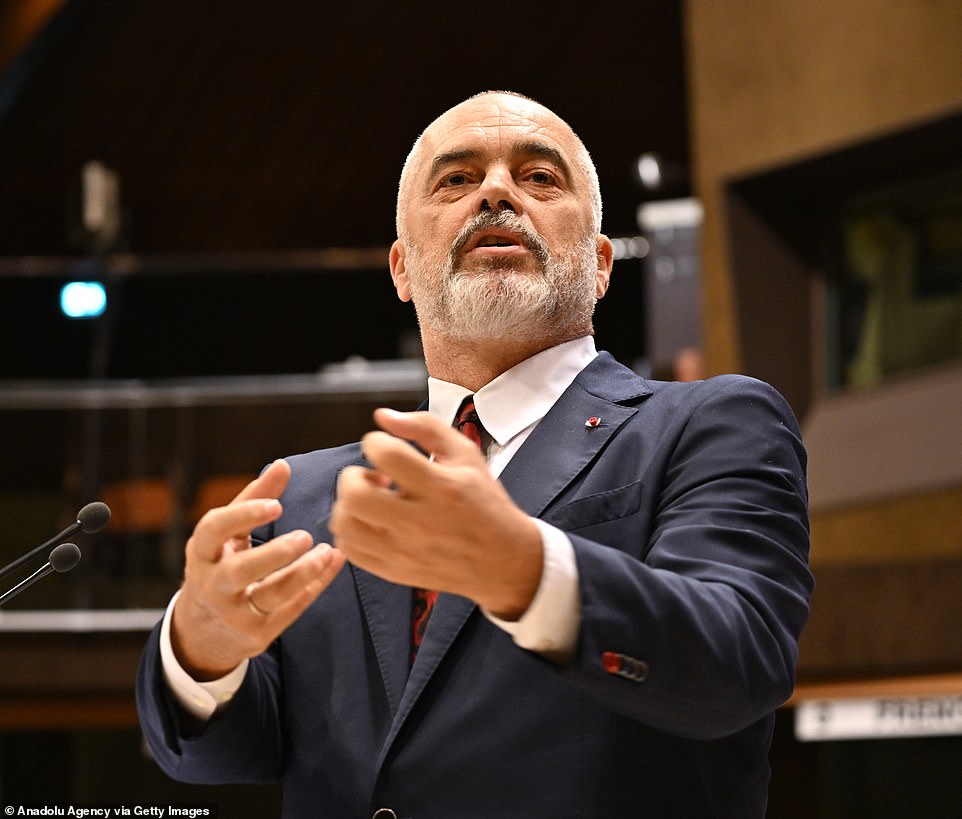 Edi Rama, who has been Albania’s leader since 2013, demanded ‘mutual respect’ and said it was ‘insane’ to blame his country for the UK’s immigration and crime woes 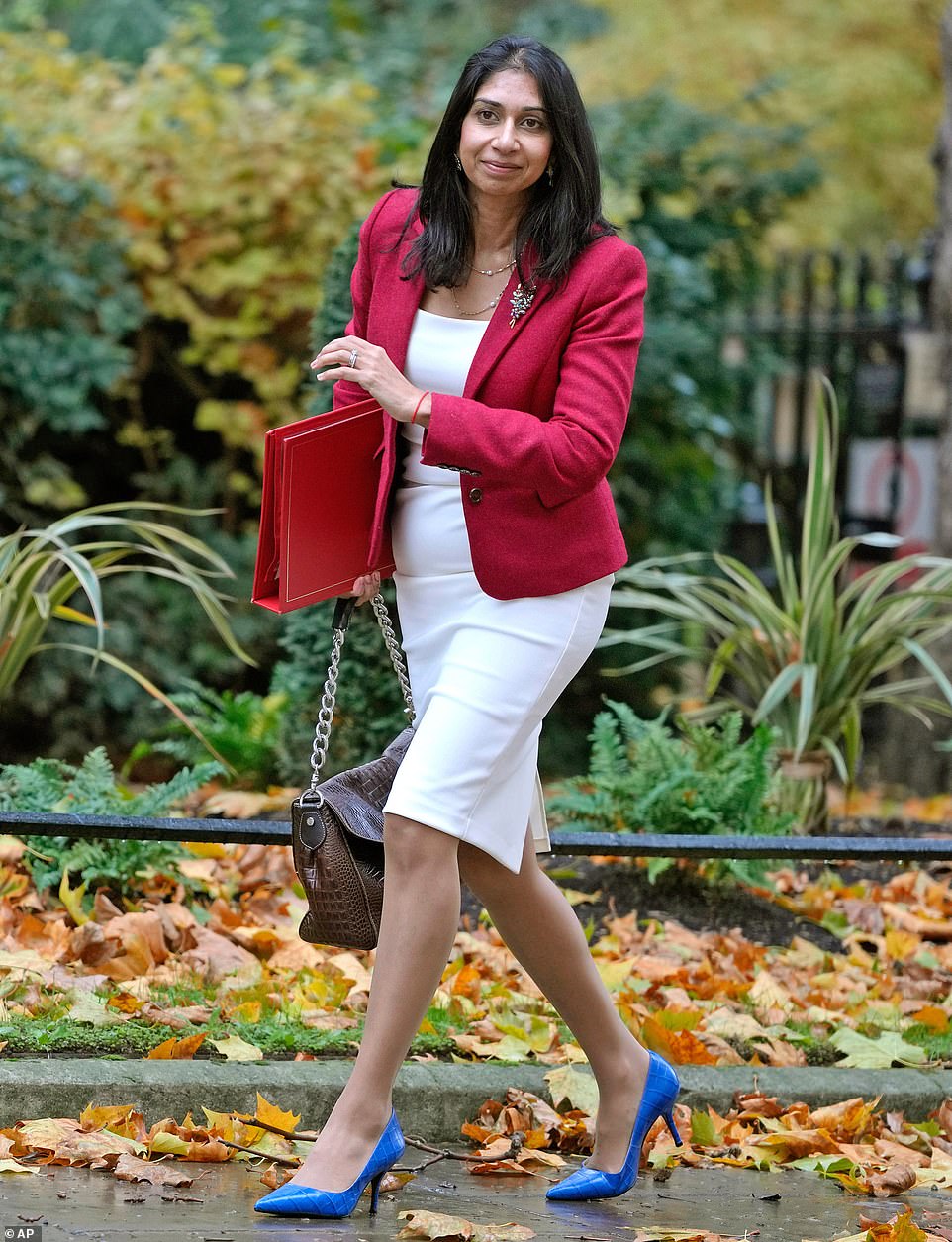 The trigger for his outburst was unclear, but it came 48 hours after Home Secretary Suella Braverman described an ‘invasion’ of migrants across the Channel 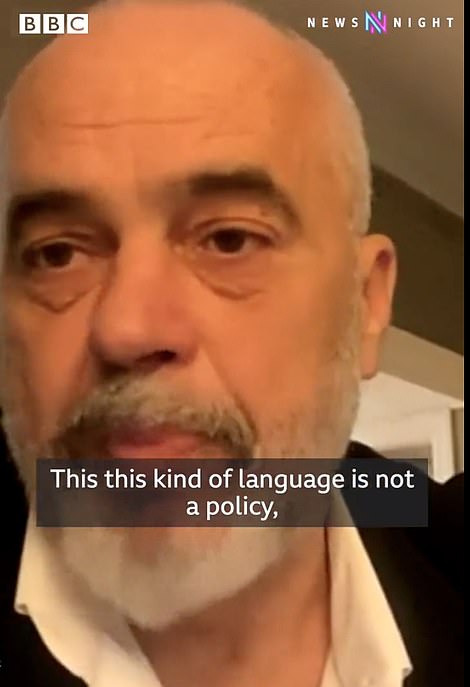 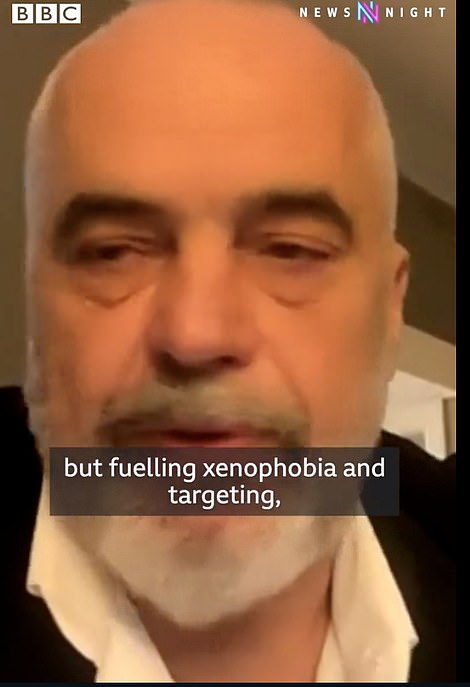 Edi Rama said Britain is becoming like a ‘madhouse’ with a culture of ‘finding scapegoats’ during the migration crisis when ‘failed policies’ are to blame. Pictured on News Night

‘I’m not angry at all. I’m a big admirer of the United Kingdom. I have friends that I’m privileged to have there, and I admire everything that Britain represents.

‘But I really am disgusted about this kind of politics that at the end is doomed to fail.’

Asked whether he would be happy to work with UK Government and agencies to clamp down on the trafficking gangs, he said his country works with UK agencies already.

‘It’s not the UK great professionals. The problem is this political rhetoric of nonsense,’ he said.

The bid to crack down on Albanian small-boat migrants suffered a major setback last night as the country’s prime minister accused the UK of ‘discriminating’ against his people. 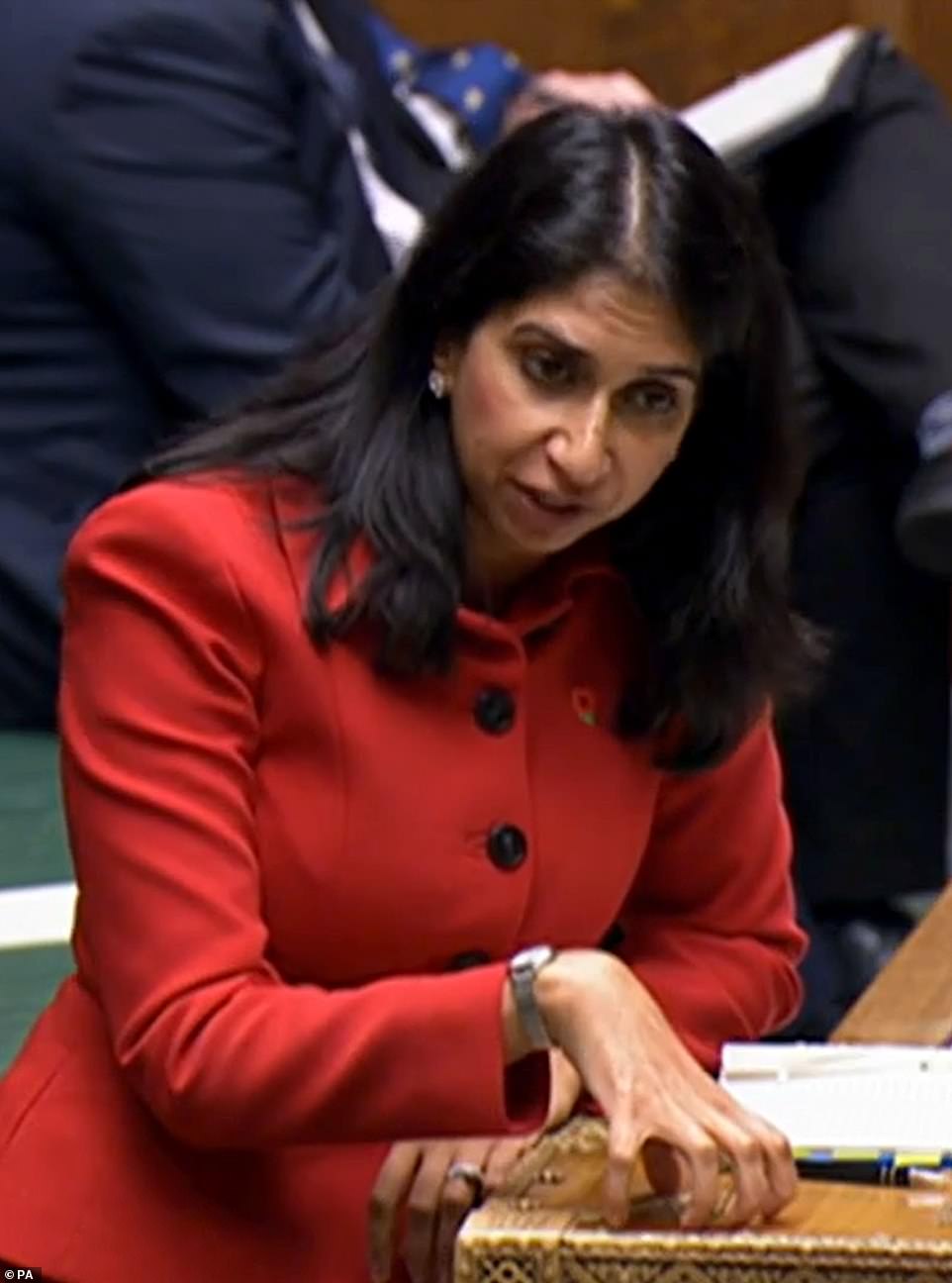 Mr Rama, who has been Albania’s leader since 2013, demanded ‘mutual respect’ and said it was ‘insane’ to blame his country for the UK’s immigration and crime woes.

The trigger for his outburst was unclear, but it came 48 hours after Home Secretary Suella Braverman described an ‘invasion’ of migrants across the Channel.

Mr Rama’s comments appeared to jeopardise a project between the Home Office and Tirana to set up a ‘fast-track’ removals programme for Albanian migrants.

It came as a poll suggested that nearly six out of ten Britons believe the Government has lost control of our borders.

Home Office sources have previously said Albanian officials ‘couldn’t have been more helpful’ as they launched joint work on tackling a sharp rise in numbers crossing from northern France.

But in a volley of critical remarks published on his personal Twitter account yesterday, the Albanian PM accused the UK of ‘policy failures’ and of ‘punishing’ his people.

‘Targeting Albanians (as some shamefully did when fighting for Brexit) as the cause of Britain’s crime and border problems makes for easy rhetoric but ignores hard fact,’ Mr Rama wrote. 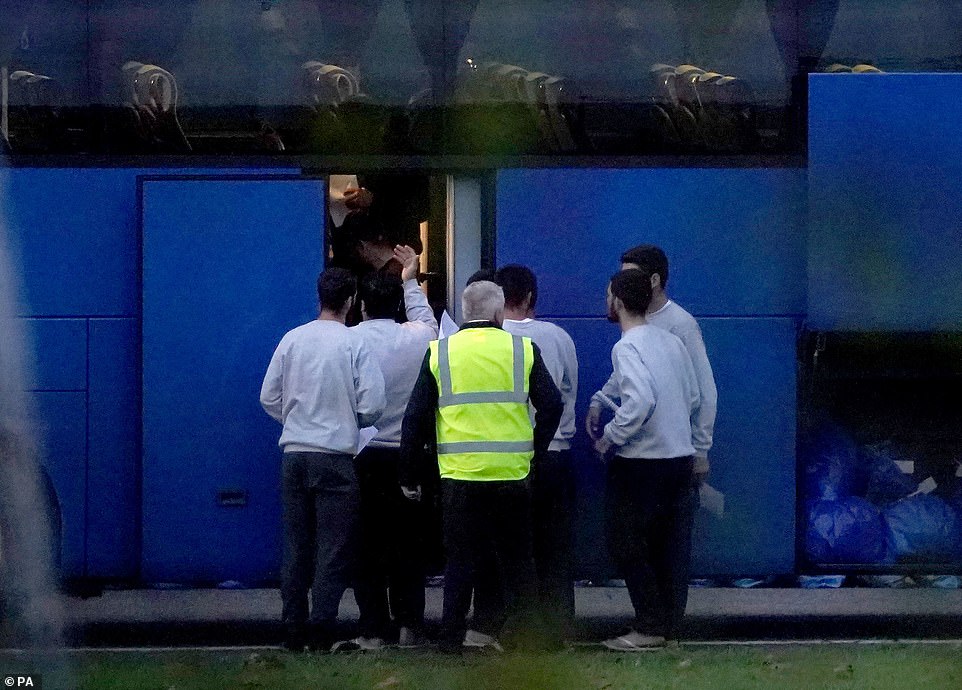 ‘UK should fight the crime gangs of all nationalities and stop discriminating Albanians to excuse policy failures.’

He said when Germany experienced a rise in Albanian migrants, it ‘tightened its own systems’, adding: ‘The UK can and should do the same, not respond with a rhetoric of crime that ends up punishing the innocent.’

He told Sky News’ The Take with Sophy Ridge: ‘I want to have a constructive and productive relationship with our Albanian friends. That’s extremely important.

‘But it is correct that a quarter of people who’ve come in small boats have come from Albania this year, and the NCA, our national crime organisation, has said that a very significant proportion of serious organised crime is emanating from those individuals.’

Ms Braverman told MPs on Monday the UK has seen a ‘surge in the number of Albanian arrivals’ and said that ‘many of them I am afraid to say abusing our modern slavery laws’.

She was widely criticised for her choice of language during the Commons debate when she said there is an ‘invasion’ of England by migrants crossing the Channel.

Ms Braverman agreed with Tory backbencher Lee Anderson who brought up ‘Albanian criminals’ and suggested those who dislike UK accommodation ‘can get on a dinghy and go straight back to France’.

The Albanian leader’s remarks indicated a souring of relations over the Channel crisis, after it was confirmed last week that 12,000 Albanians had reached the UK by small boats this year, compared to 50 in 2020.

But a Home Office source insisted last night: ‘We are always working closely with our Albanian partners on a range of issues and will continue to do so.’

A ‘rapid removals’ deal with Albania was announced by former home secretary Priti Patel in August.

The Home Office said Albanians who claimed asylum here would have their cases processed ‘immediately’ and those with no right to be in the UK would be removed ‘as soon as possible’. 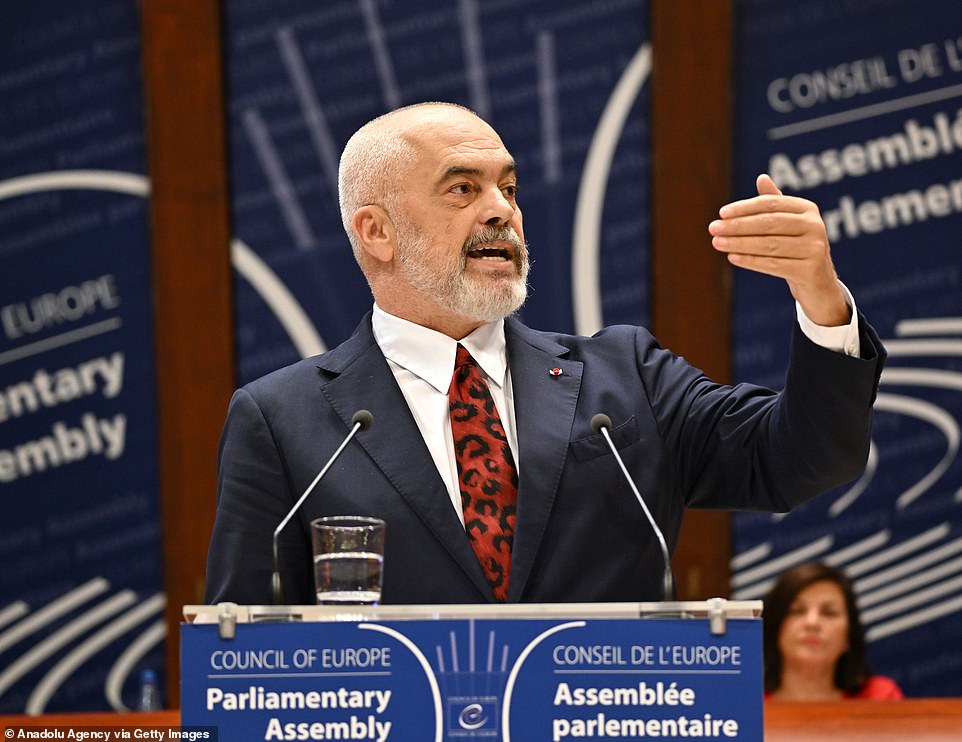 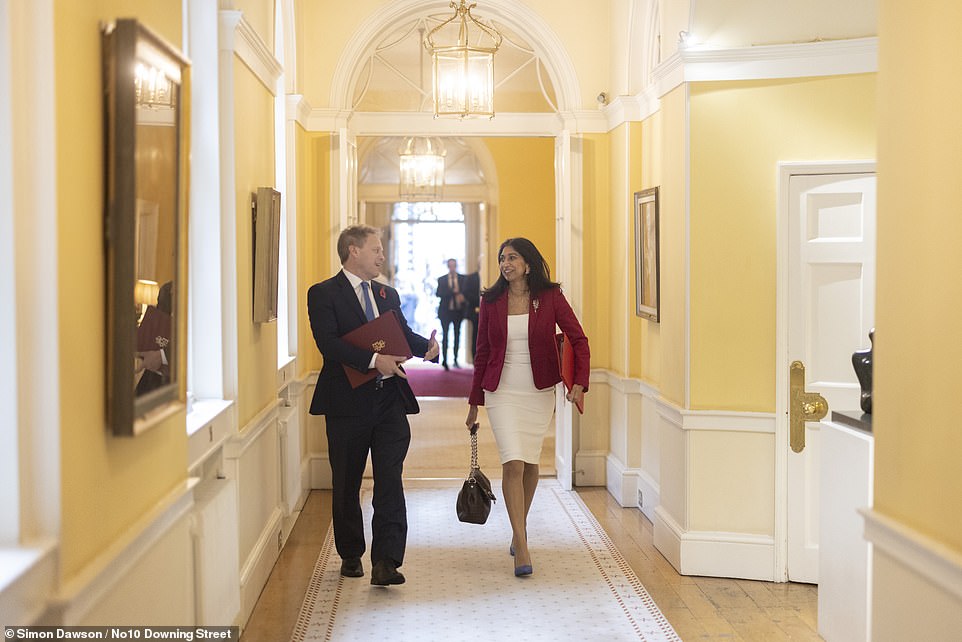 Senior police officers from the Balkan country were due to come to Britain to work alongside UK immigration officials, and officials in Tirana would agree to receive planes at short notice.

Mr Rama’s intervention will raise new questions about the Government’s ability to tackle the migrant crisis, with Prime Minister Rishi Sunak admitting yesterday it was a ‘serious and escalating problem’.

A poll of 1,212 people for the GB News channel, published last night, revealed that 58 per cent agreed with the statement, ‘The British Government has lost control of the country’s border.’

They were also asked what should happen to Albanians who arrive here by small boat. Some 61 per cent of respondents said they should be returned to Albania, and only 13 per cent believed they should be allowed to stay, with the remainder not expressing an opinion.

Ms Braverman has been facing criticism for the severe overcrowding and poor conditions at the Manston migrant processing facility in Kent and a failure to tackle Channel crossings.

The problems have added to her woes as she continues to face scrutiny over the security breach that saw her lose her job under Liz Truss, before she was reinstated by Rishi Sunak.

We Compare KFC in US, UK, Japan, and India Food Wars Why ‘the Last of Us’ Chose ‘Long, Long Time’